10 Reasons to Adopt an Older Cat 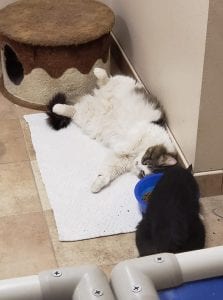 So today is the big day. You’re on your way to the local animal shelter to adopt a new kitten. Congratulations! It’s a big responsibility, but you should be happy to know that the Powers of the Universe are about to stamp your soul with a golden star that will ensure your entry into heaven, or at least guarantee that you won’t be reborn as a rat. You’ve probably given some thought to what kind of kitten you want: Tuxedo or Calico, male or female, large breed or small. But have you considered adopting an adult cat? You may find that there are many more adult cats waiting for homes than kittens. Take a minute to think about it. You may be glad you did.

Here are ten reasons why you should adopt an adult cat, instead of a kitten:

Kittens will always be popular, and most have no trouble attracting admirers. But for the abandoned, forgotten, and heartbroken adult cats, you just might be their last chance to have the love and warmth of a home where they can live out their years in comfort. Please consider adopting an older cat. When cared for properly, cats can live well into their late teens, and sometimes into their early twenties. Typically, they will remain active and playful throughout most of their lives. Some may need a little extra patience while adjusting to a new home, but once they feel safe and secure again, most will give you years of faithful companionship and unconditional love.