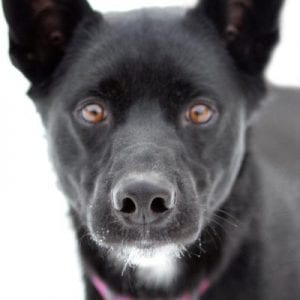 Wikipedia has defined black dog syndrome as "The low adoption and high euthanasia rate of black dogs in shelters. Black dogs are often the last to be adopted from shelters."

This 'syndrome' does not have much factual evidence behind it, but I believe anyone working in a shelter or rescue would agree that it exists.

The public is often shocked to hear this and really don’t know anything about it. There are a couple of different theories on why black dogs are overlooked. One is that they do not take a good picture, because of their solid dark color it is difficult to get them to stand out. This is a problem since many people look for pets on websites such as Petfinder. Also some people do not like the darker fur because it shows up more with shedding. Some may also think that because certain dogs have been at the shelter for a long time, they’re not getting adopted for a reason. Whatever the reason for it may be, people unconsciously tend to overlook black dogs. I chose to write about this because at HART we get tons of lab mixes in, and the majority of them are black.

Although they will find a home eventually, it always takes them longer than most dogs. This can be heartbreaking when you work at the shelter and literally watch a little puppy grow up there for 2 months or more. We do our best at the shelter to promote the dogs who are having a hard time finding a home, which does help. But there are times when we have an entire side of the kennel filled with black dogs.

Sometimes we have to pick a bright collar for them, rearrange the adoption floor so there are not too many black dogs in a row, or make a special sign or poster to get people to see them. It is sad to see these dogs fade into the background and they sometimes become depressed which does not help them get adopted either.

So next time you come to the shelter, truly look at all of the dogs and get to know their personality. There may be a ‘plain’ looking dog that is the perfect fit for your family!